Then the baby gets here and ohhhhh let the guessing begin! After seven months I have learned that people will see what they want to see and usually each side of the family tree will be bias towards their own. Even when it comes to personality characteristics relatives will still say "that's just like his mom at that age" or "he's 100% his dad"; again people will see what they want to see. Last I checked it took two to make a baby and two sets of DNA are intertwined to make a new person. They might favor one or the other parent a little more in various departments but we all get a piece of both of our parents in some way, shape, or form. Sometimes we even inherit traits from ancestors that are not featured on either parent. DNA is a funny thing!

What's a parent to do? Just smile and nod when the comments come. Odds are you aren't going to change their mind.


This is a collage I made of Will and I as babies and that is Calvin of course in the middle. To me, me and Calvin are identical except for eyes and ears. He has Will's eyes and my Daddy's ears. That's right, the ears aren't even from either of us. Not directly anyway, it wasn't the dominate gene that I got but floppy ears are somewhere in my genetic code from the Warren side. I'll say it again...DNA is a funny thing! 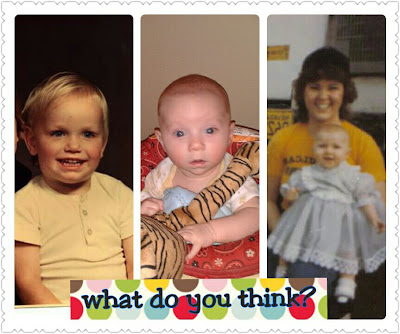 Regardless of the range of opinions; my final verdict is Calvin is a beautiful boy no matter how he's dissected and that's really all that matters.

XOXO...& a little bit of drool