Calvin was scheduled for surgery on Tuesday to have tubes in his ears. That all changed last Monday, or maybe technically last Sunday. Out of the blue he just started spiking a fever and became un-playful. He had started a horrid sounding cough Saturday but he has has that on and off for months. As the night went on Sunday he started breathing fast and sounded like he was working hard to breath. I didn't like what I was hearing but we had an appointment with his ENT in less than twelve hours for pre-op clearance. Something told me there would be no surgery this week. I didn't sleep much that night, I kept waking up to check his breathing.

Monday morning came and he was still running fever. We went to his appointment and his ENT doctor,  Dr. Carder took a peek in his ears and said sure enough he had a current infection which makes five in five months. Yep, no surgery. He went on to listen to his lungs and told me that they "sounded like a train wreck" and I needed to take him somewhere now for more assessment. He guessed he would have a chest x-ray and breathing treatments. We re-scheduled for July 9th and I walked out to the car to call our pediatrician. They didn't have any openings until 4pm. I left a message for the nurse to see if we could be squeezed in any sooner. I drove to a nearby McDonald's for breakfast and to slow down my racing mind. I went through drive through and sat in the backseat with Calvin. He looked worse than he did fifteen minutes ago in the doctor's office. I was able to reach Will and I told him what I was told. After discussing the hospital options I had around me we decided Downtown Children's was the best place to be in the worst case scenario. Off I went with a whimpering baby in the backseat.

Children's is even larger than it looks from the freeway, also note that it's attached to Parkland. I work at a very large hospital and used to navigating multiple buildings and such and even I felt overwhelmed. The folks that get lost and complain about our hospital layout would end up on milk cartons in this place. Children's/Parkland resembles a mini city.

For all the stories I've heard about how busy and packed Children's ER stays I was really surprised at how fast triage happened and how fast treatment started. They sent him to fast track which I was upset about because I felt he had real problems going on. I've worked around healthcare long enough to know that fast track = BS. I didn't think being told by a doctor to seek medical attention NOW because he sounds like a train wreck is BS! Surprisingly though the NP treating him did take everything serious and there was no dilly dally and she was aggressive where it needed to be. We still spent all day there but it was a productive all day event. Not just spending four hours in the waiting room waiting to get seen type of ER visit.

He was given Motrin, suctioned, a nose swab and then an anti-biotic shot (1 of 3 part series) since he had been on other oral medicines with the previous four infections.The shot was awful; the dose was split into two syringes so so much medicine wasn't injected into the same muscle. Mainly comfort measure. It was obviously painful because he cried for twenty minutes and I cried for five. After he calmed down they took for chest x-ray which came out clear. Last step was breathing treatment which was a going home medicine. He was diagnosed with the ear infection, rhino virus and reactive airway disease since he as built up a history of these symptoms. 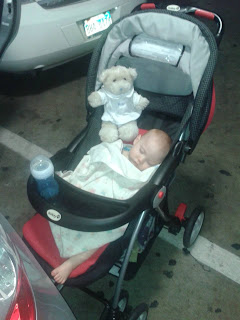 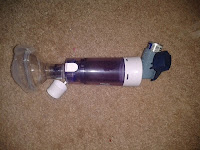 Calvin's Albuterol for wheezing and coughing. Treated much like asthma


He got his other two shots in the pediatricians office on Tuesday and Wednesday. His fever broke finally on Wednesday and life resumed on Thursday. WHEW! It was a long tiring week but he has made a decent recovery. 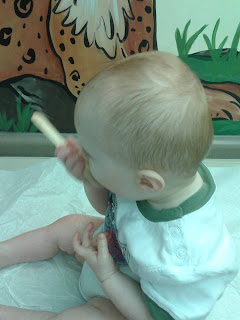 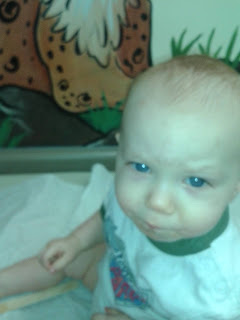 xoxo and a little bit of drool