Has your baby started teething yet? Scared of the discomfort teething might cause your baby?

You are not alone, no one wants to see their baby in pain. It’s tough to console them as they don’t understand what happening to them nor can they comprehend you telling them. They just know they hurt! For several decades parents have been turning to teething medicines such as Anbesol or Orajel that numb the gums to minimize pain. The numbing agent in these medicines are typically benzocaine and there have been recent advisories for them.

The FDA and the AAP have both made stances against the use of any brand of topical teething medicine. I am by no means picking on Anbesol and Orajel, any brand containing benzocaine is not recommended for children under two. Benzocaine can cause a condition called methemoglobinemia which effects the amount of oxygen that is carried to the blood stream. It’s not common but when it does happen it is a very serious condition that can even cause death.

I frequently used Baby Orajel with Calvin as my mother did with me, and I was shocked to read about this! I had heard in 2013 when Calvin did most of his teething that the use of benzocaine should be minimal as possible from his pediatrician. Fast forward to 2014 and now the shared stance is none at all for kids under two years.

Offer a variety of chew friendly toys so your little one can find a texture they prefer for soothing gums. The good old cold rag can be tried or a frozen fruit or vegetable. Such as a carrot stick or banana can be gripped by an infant.

Hang in there parents! 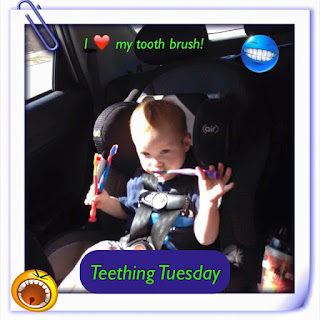