Coming Out of The Dark

During my pregnancy with Calvin in 2012 I had normal prenatal care with an OB plus a little extra due to a few scares and worries along with way. I had all normal and standard genetic screening, it wasn’t even a question for me. I had an induction due to social and safety reasons. You can read about that HERE. I ended up having an emergency C-section that likely would have happened regardless if there had been an induction or not.

So how did I ever get involved with the natural child birth movement and eventually get fed up with the zealotry? Today, you will find out.

I first caught wind of it in 2010 while shopping for health insurance. An insurance agent told me that other clients told him they used midwives and birth centers because they were cheaper. That was my first trip down the rabbit hole. I Googled midwives in Dallas, where we lived at the time. Homebirth came up of course, and I liked the idea of staying in my home. I brought up my discoveries to the husband who was an EMT at the time and a paramedic student. His response was no way! Meh, it was just ideas and shopping around so I wasn’t off put by his response.

Moving forward into 2011, we had talked about trying to conceive after I suffered an early miscarriage. I was researching hospital options and birth centers in my area and still taking a peek at this homebirth thing. However, by May I had found the wonderful OBGYN practice that I am still with today. I forgot all about homebirth since I now had a job that provided great benefits and I had a doctor I loved. Moving into 2012 when I was actually now pregnant, I continued researching natural labor and birth techniques. Such as, the old Lamaze breathing, calming solutions like music or focal points ect. I knew I absolutely did not want an epidural, I didn’t mind IV pain relief, but NO epidural. Not to earn a badge of honor, but because I didn’t like the idea of a needle or catheter placed in my spine. I had major spine surgery in 2010 and I just wasn’t comfortable with the idea.

Come induction day (reason why HERE) once contractions began..and began HARD I begged for drugs, which I was furnished with. I was advised I needed to stay in bed for monitoring and so the vaginal medicine I was given would stay in place. The three page birth plan I had made went out the window when I chose the induction route. After several rounds of Demerol I was advised to consider an epidural because I could only be allowed so much of IV drugs, and I had a very long way to go still.

The whole story is HERE, but after several weeks of replaying the events in my head I began to think back to all the reading I did about labor positions and current practices that are so evil and bad. I went through a mental checklist of the “cascade of interventions”, and nearly everything was checked off. Thoughts of doubt crept into my head that I really needed the C-section. If I had just stuck it out and not asked for induction then it would have been a better experience.  If I just not asked for the induction then I would have had the freedom to labor more freely. The C-section wouldn’t have happened, we would have bonded and I would’ve been able to breastfeed. Stupid me! Why did I do that?!? Stupid me! If…IF there was ever a next time, maybe I will just stay home!  The darkness of postpartum depression was setting in.

I was fairly certain Calvin would be an only child due to other problems I had encountered and the difficulty getting pregnant, but I was curious now about VBAC safety and accessibility. It looked grim, it seemed women had to fight tooth and toenail for them. My VBAC search lead me to the virtual doorstep of ICAN of North Texas. The worst doorstep I could have found myself on. They welcomed me and told me they cared and took me further down the rabbit hole of fear and self-doubt.

They had me at, we care about you. No one had said that to me.

I kept up with the village, reading which providers were and weren’t VBAC supportive, which birth centers had the biggest birth tubs and similar topics. They existed to care about women’s feelings and comfort them in the wake of birth trauma. Birth trauma that only happens with providers that are not on the approved VBAC friendly list and if you don’t hire a doula, also from the same list and members of ICAN.

I ran my OB’s name across the village and received either neutral to barely positive opinions. The practice as a whole was on the “not VBAC friendly” list, most said he was kind but you know, guilty by association. Dr. H had told me he was all for VBAC but did not feel that I was a good candidate during my postpartum checkup. Hummm, that sounded like the bait and switch the village spoke of, if there was ever another baby in my future I didn’t feel like that practice had my best interest at heart. No worries though, I had the ICAN village to guide me in assembling my “Birth Dream Team”, provided I could afford it.

I began going to their quarterly C-section support meetings, which is like Alcoholics Anonymous but for women who had had C-sections and were disappointed about it.

Hi, my name is Mindy and I’ve had a C-section and hated it.

Welcome Mindy, you’re in a warm and cozy environment to have hated your C-section because we’ll constantly remind you of how evil the medical establishment is.

Ok, not their actual introduction but it might as well have been!

I liked going at first and hashing out my emotions that my husband didn’t, or perhaps just couldn’t understand. However, by the third meeting it was starting to feel redundant and unproductive. Every meeting was a totally different roster of women in attendance, so it was the “Hi, my name Mindy and I had a C-section” spill all over again. There was no conversation about how to get past the perceived failure. How there was actually no failure at all. That despite however what happened in the beginning, our babies knew and need us know. It seemed to me that the only therapy recommended was getting pregnant and “rock that VBAC” and show the mean doctors that our bodies weren’t broken.

I’m sitting here in deep depression, constantly thinking of giving my baby away because I feel like I’m f*cking everything up and I get the suggestion to get pregnant again and hire the right “birth team” and the oh so magical “healing VBAC” will make me feel just peachy.

Sheer brilliance ICAN….sheer brilliance! It’s like throwing a drowning person a cement block. Oh by the way, the ICAN member who hosted the C-section support group was a fairly popular doula who shilled her services to women who came to these meetings. No, no conflict of interest at all.

I left that third meeting feeling lower than ever, I buckled Calvin into his seat and threw the stroller into the back of the mom wagon as fast as I could because I didn’t want anyone to see me fighting tears in the parking lot. I cried all the way home. This was just ripping a scab off a healing wound, over and over with each meeting. I decided that this was my last meeting. My marriage was suffering, my relationship with my baby was suffering, and my performance at work was poor. I couldn’t do it anymore, I needed to climb out of this dark place and these people weren’t helping.

I began withdrawing my attention away from ICAN forums and looking for other sources of information and support. I found Dr. Amy Tuteur’s blog and Facebook group where evidence based medicine was talked about and often ICAN and similar organizations were laughed out of the building. There were women there who had similar experiences such as mine with woo-y birth communities, and women who believed in the natural childbirth zealotry until their babies were casualties of the misinformation and unqualified attendants. I was disgusted with how these loss moms were then treated and swept aside by the NCB (natural childbirth) community. Their stories showed American midwifery for what it is, an absolute joke and in some cases a horror show.

Do mistakes happen in the medical community? Yes they do, but what is different is that there are review boards and disciplinary actions that take place. When an American midwife screws up there is no repercussions because their governing bodies close ranks around them. Very rarely does a midwife carry malpractice insurance so suing them is usually not an option or in vain as there is nothing to collect on.

Slowly, I began to crawl out of the darkness as I saw how dark and shadowy the NC B organizations and communities could be. There was no guarantee I would have had any other outcome had anything been done different or had another type of provider. Statistically I would have had a worse outcome. Regardless, I have an awesome, stubborn, creative, crazy, and intelligent little ginger boy! 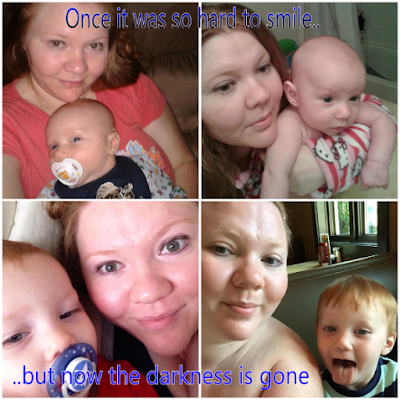 Posted by Unknown at 9:25 PM No comments: