The Victoria's Secret Photo That Made Women Clutch Their Pearls

Last week Victoria’s Secret 2016 swim catalog arrived in the mailboxes of ladies all over America…and many of them flipped out!

Boy were they right!

One of the inside photos features a sunset silhouette of a topless model donning a high waisted retro style swim bottom. A very adorable swim suit bottom I might add, I think I may even purchase it before summer gets here.  You can view  or buy the photo in question HERE. 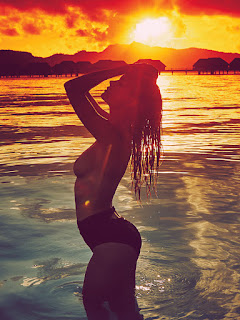 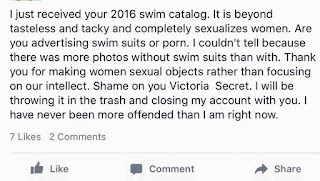 Women ARE sexual beings! Most are anyway.

I do not know of where it has ever been said that breastfeeding is bad? However I have seen where people complained that a mother was not feeding in a discreet manner, and most or all of her breast was visible in public. There is a very wide array of opinions around the topic of breastfeeding in public, but I don’t think anyone has ever said breastfeeding itself is bad. Personally I had purchased an Udder Cover for myself, but I agree with the opinion that folks can look the other way if a mother breastfeeding bothers them. Clearly if she’s sitting there with a baby to her breast, she isn’t there to put on a peep show.

As far as the statement of “tired of breasts being sexualized”, of course breasts are sexual! They have been sexual since the beginning of time and will continue to be sexual as long as planet earth is spinning on its axis. There had to be a daddy (or baby daddy) that was turned on by mama’s breasts before there was a baby to feed.  Women can multi-task and are multi-functional like that. Our bodies can do some awesome things! Embrace the fact that we are sexy and feed babies too, it’s like a bonus!

I find this layout to be definitely sexy but tasteful, it’s a silhouette not full frontal or broad daylight; or a full frontal in broad daylight.  I do not understand why women are getting upset over this photo, Victoria’s Secret sells sex.  They do!  Why would someone not expect a company who sells sex to not be sexy, and push the limits on sexy?  Did folks start to think it was just a lotion store? No, it sells all kinds of things for the purpose of obtaining sex. 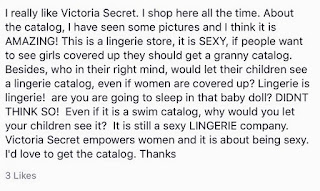 Finally, someone with some sense!

Please, stop with the Pink banter! The regular line is targeted to adult women and Pink is targeted to teen girls and young women. Just throw it away if you feel as if the catalog will influence your teen daughter to pose topless.  While your at it, check all the publications and companies aimed directly at teens and you might be surprised at what they are already looking at.  Besides, any business can be picked apart and called names if you try hard enough. Is any business who sells condoms and lube obscene because they are used for sex? It is a part of life and intended for adults, but don't think teens do not notice or know about them.

I asked my sister-in-law who breastfed her youngest kid well into toddler hood if she was offended by the photo. Her response was “Offended by what? It’s a girl in the ocean.” I had to fill her in on the social media heat as she never jumped into that black hole.  She too was stunned at women becoming upset over this photo. She said, “Doesn’t Victoria’s Secret sell sex anyway? I don’t know why this was shocking?” HA! I have a cool sister-in-law! As far as how she managed nursing in public, she went to the car for privacy.  Her sons are twenty-two and twelve so her breastfeeding time pre-dates the breastfeeding awareness and acceptance like it is in present day.  She was impressed to know that “family rooms” or “mother’s rooms” were common now along with modern ergonomic baby carriers and wraps that make breastfeeding on the go easy.
We really have come a LONG way in acceptance and support.

Boobs are boobs and they are natural and part of a woman’s body regardless if they are feeding a baby or standing in a sunset.  Boobs are either accepted or not accepted, you do not get to pick and choose the situations that only make you feel comfortable.

Posted by Unknown at 1:00 PM No comments:

This is my first holiday without Mini Ginger. We have temporarily come to a custody agreement until Mini Ginger starts pre-k in the fall. We are rotating every two weeks between us. Dividing the time as fairly as possible, along with juggling the miles between us.

Many things that happened in 2015 have not been very fair for me.  The scorned woman in me wants to say fuck all this fairness business, but deep down I know that is not the right example for my son. We have a minimum of fifteen years to co-parent together. Personally, I do not like unnecessary strife and stress in my life. Acting the proverbial scorned ex-wife would do nothing but create exactly that, strife and stress.

That scene from Waiting to Exhale where she burns all his shit and his car too.

If only that scene would fly out here in the real world!

Mini Ginger deserves the best of what we can give him as parents from this point on. All that nonsense is not conducive of a positive environment between his parents. Fifteen years is a long time for a kid to live in a rotten situation.

YOU CAN FIND ME AROUND THE WEB AT: 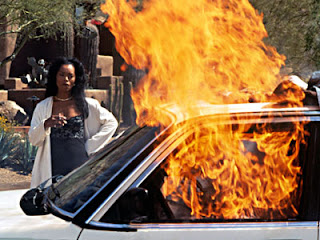 Posted by Unknown at 1:02 AM No comments: