He finally had tubes put in today. It took switching back to our original ENT after a fiasco last week when it was supposed to be done but we got it done! Just hours after the procedure he is acting like a new baby. 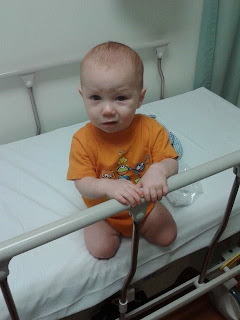 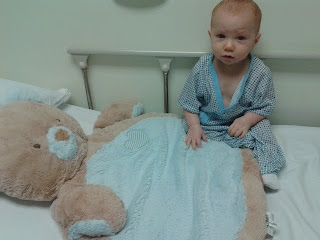 This fiasco we went through last week left us at a cross roads with our current set of care providers. I understand being safe and I want to be safe with my baby but our current doctors have been too safe. Almost barely acknowledging Calvin has a chronic problem. Last week when we were denied clearance for surgery last week the reason given was "he sounds wheezy". Well ok, we were left to wait for a hour in the waiting room in which Calvin bounced off the walls and it was all I could do to keep him from tearing down their office. He's been extremely hyper I bet he is wheezy! That is why he was diagnosed with RAD and has Albuterol for. Then I heard the same thing I've been hearing for months.."give things another week and he might dry up with warmer weather".

It's July, we are half way through the summer and it s 105 degrees and he's NOT DRYING UP! I never went to medical school but I do grasp the concept of a chronic condition and chronic isn't just sometimes or only on Tuesdays that the blue birds come out and chirp. RAD is baby asthma and it's not going away overnight. A lot of infants do outgrow RAD and doesn't guarantee an asthma diagnosis later in life but it's not outgrown in a week. It's like they are treating this a just an ongoing cold and not what it actually is.

This surgery by the way does not require intubation, only gas and no IV's and lasts about ten minutes. None of that was taken into account for; he will only get sick again and sicker as he did two weeks prior with the crud and congestion and fluid sitting inside of him. The tubes will keep all that drained.


I was mad! Really mad to say the least! When I got to work last Monday I called ENT Care for Kids which was the first people we saw. I wish I hadn't left and had done the surgery two months ago instead of listening to too many opinions. Calvin wouldn't be going through this now. It was the right thing all along. Luckily, just luckily the Dr was willing to take us back and squeeze us in that day. I walked in with my head hung in shame and told our story of the last two months. He did his own evaluation and exam and didn't think the wheeze was serious enough to not proceed. After I did some checking with insurance with the hospital he could do it at we scheduled surgery two days later. I also began to re-think my pediatrician choice and after taking the week to think decided it was time to cut ties. We will be moving to the practice I was going to take him to when he was born. I've heard nothing but good about them from numerous sources.

The big day...7/15/13. We headed out the door around 5:30am for the hospital; the Texas Health Resources Center for Diagnostics and Surgery and everything about check in and registration went smoothly. The nurses were excellent and they even brought out a wagon for him to around around the unit to to occupy him until it got closer to being taken back. He was elated about riding around in the wagon! This got him worked up into a wheeze which made me nervous since we had gotten this far. The anesthesiologist came in to exam him and she started asking who his pulmonlogist was and why hadn't he been referred to one after his RAD diagnosis?? I told him I had the same questions but we were in the process of moving pediatricians. She suggested going ahead and looking someone up and booking my own appointment because she definitely agreed he has RAD. She ordered a neb treatment for him to see if it would calm things down along with getting him to sit still with some cartoons. It worked! She barely cleared him but stilled cleared. They carried him back for the procedure and the waiting began. Give or take ten minutes later Dr. Badi came in the holding room and went over what they did. They sucked a ton of goop out of his little head, all the junk that has been making him sick over and over. He has some anti-biotic ear drops to take for the next five days to kill whatever tiny bits of goop they couldn't reach in nooks and crannies. By the time we got done chatting Calvin was ready in recovery and off around the corner I went where he was wrapped in a blanket and being held by a nurse who was showing him his heart monitor. He was very calm and happy but drowsy and definitely ready for something to drink. Will had just gotten off work and had finally made it just in time for the anesthesiologist to come out and go over he part. He had done great with the anesthesia and came out pretty good and reminded me again about seeing the pulmonary doctor and also mentioned seeing a digestive specialist for his GERD since that had not been thoroughly explored either and she gave me a personal referral to the best in town! I loved this doctor!! She also told me if I had to see our normal pediatrician while we are transitioning and they wanted to doubt his RAD to call her personally and she would set them strait! 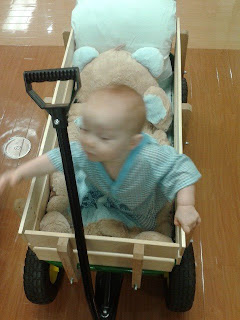 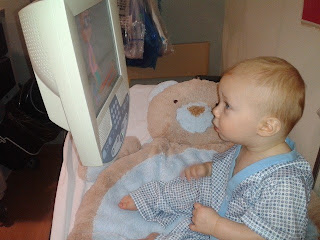 
We were going home about thirty minutes later! 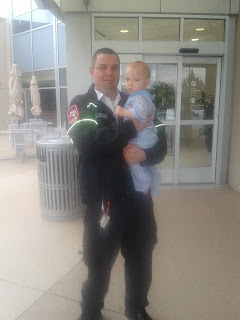 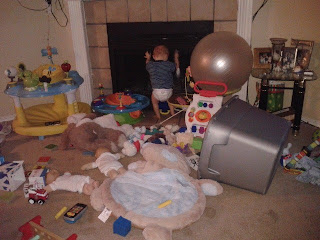 We will have a post-op follow up in a few weeks and several appointments with specialists over the next few weeks too. Updates will follow.

XOXO...and a little bit of drool