The term "mommy wars" has been floating around for several years, at least that I know of. It really came to my attention in 2012 when I was pregnant. I had no idea just how big of a deal or how serious *some* women took breastfeeding, cloth diapering, vaccines and other various parenting choices.

Summer of 2012 when I was in my third trimester the memorable Life magazine cover of "Are you Mom Enough" which featured a cover photo of a sorority looking girl with her boob flopped over a tank top and breastfeeding her three year old son. 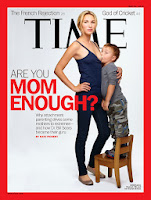 Boy was I blown away with this message and what I was supposed to do once this Little Monster got here. Attachment Parenting...huh?? The woman featured in this photo was interviewed on the Today Show shortly after the release of the Time issue and made the subtle claim that she had no control over the photo on the cover and just wanted to get the dialog going.

At the time I was on a lot of pregnancy, infant and parenting pages on social media and people either applauded and supported this cover or hated it. There was no "dialog" going about attachment parenting but there was sure a lot of cyber bulling that reeked of sanctimoniousness. Over time I weeded those pages out of my feeds not to mention a few friends who just did not know when to stop.

Now that I've been at this mommy thing for fourteen months, when I look back at all the obnoxiousness or when I do run across some online argument turn nasty I think who are these people and do they act like this in real life? Come to think of it, I've never gone to any park where there was a "mommy war" under way with mommies catapulting rocks and dirty diapers at each other. That raises the question of just what are mommy wars and what is keeping it going? I'm not looking for the generic answer of "mommy wars are moms who are on opposite ends of the parenting spectrum". Think about the word "war" and what that usually indicates; combat, rumor spreading or verbal attack, egging houses, other random violence. I can't recall hearing any news story about a moms being arrested after pulling each other's hair out in a yoga studio because one wouldn't listen to the other's baby wearing philosophies. The only thing from the war list I have ever seen demonstrated is verbal attack and where is that happening 90% of the time? You got it, online groups/clubs and social media.

I think of women who are doing the war raising so to speak as people from the MTV show Catfish. Their lives are so bland, boring or unfulfilled that they tout themselves as some sort of expert putting others down who haven't and need to "research". In real life they are just desperate for attention they will take it from any outlet they can.

"Do your research" they say and you'll know why "we cloth diaper in this house and you'll find there is nothing better". Then there is someone who feels they must crusade against this slander and then it starts. Around and around and around they go; posting links and quoting doctors. Your classic mommy war. There might be people in real life who try to shove their ways down your throat but in real life you say no thank you and/or walk away. Just don't engage this online silliness with strangers who need to feel fulfilled in some way. It's pouring gas on a fire.

You can save yourself from the wasted time and energy by just leaving the group or unlike a page or never join them if you haven't signed up for any yet.  Try a few if you must but never feel obligated to remain someone's friend or worry what these strangers will think if you leave the group if things start getting out of hand.

I'm not here to bash any choice. You want to breastfeed for four years, do it. You'd prefer to formula feed, do it. You want to cloth diaper, do it. You prefer Huggies, ok. You love Moby wraps, alright. You'd rather stick with a stroller, no problem. You want to co-sleep until whenever, whatever works for your house.

Since when did our personal preferences and methods become everyone else's business?
Stop the mommy wars.....stop engaging. If there is no one engaging then there will be no one to war with.