Trends, Good for Fashion but Bad for Birth

The title says “bad for birth” but trendy health advice or practices are bad for healthcare overall. Everywhere we look there is some new detox, cleanse, essential oil therapy, immune booster and on and on and on. Celebrities of all types endorse these random products, ideas or methods. The Dr. Oz Effect is now recognized as a real disorder. Pure nonsense!

There is so much that irritates me about these charlatans promoting medical woo; but my focus in this blog entry will be on birth and birth related trends.

In 2008 a propaganda filled documentary by a washed up trash TV talk show host was released, which lit a fire in American women to question their obstetric care.  This horrid fire promoted that everything mainstream medicine is bad and scary and that care from often unqualified midwives was much better. The zealotry of the NCB (natural childbirth) movement has become a predominate trend thanks to the little gem of a documentary. A trend that has fueled the pockets of outright unqualified and some barely qualified lay midwives and Certified Professional Midwives (CPM),as well as just as many unqualified and overzealous doulas.

The women who at least stick with real medical care “just in case” of the worst case scenario and choose to hire a Certified Nurse Midwife (CNM) or OBGYN and birth in a hospital can sometimes demand unreasonable requests from their providers. Erroneous advice given out by the NCB (natural childbirth) community telling women to refuse IV’s, fetal monitoring, and other basic standards of care for the sake of a “beautiful experience”. Labor is…well its labor. While the end result is a beautiful new life and experience; the concept of labor itself being beautiful just flies right over my head!

There are reasons why certain procedures are standard and it is not to ruin anyone’s birth experience. While some procedures may be skipped for some patients, they are essential for others. This is where an open dialog with your care provider is instrumental, but writing a ten page birth plan is setting the stakes a tad too high. By all means, you should feel like you can ask your provider anything without feeling put down or made to feel dumb. Sure, there are bad apples out there in the mix as in any profession, but there is not some massive medical conspiracy out to get the public. That is a fear the NCB community feeds off of.

Dr. Linda Burke-Galloway, an OBGYN of more than twenty years and author of The Smart Mother’s Guide to a Better Pregnancy had this to say when asked about trendy birth plans; “I.V. access is necessary in the event of an emergency. You certainly don’t want to struggle to get I.V. access if a patient is hemorrhaging or dealing with an acute condition…consent to at least a Heplock would be needed. If a patient insisted on eating her placenta, I’d make her sign a waiver of liability.”  However there is one trend that has gone legit since it starting making the internet rounds several years ago. That is delayed cord clamping, there is enough evidenced based research out there to support this practice according to Dr. Burke-Galloway. So if this is something you are interested in for your delivery, talk to your provider at your next appointment about delayed cord clamping.

So many things get their start via internet circulation and social media sharing, but just because something is on the interwebz does not make it true. About a month ago I started seeing articles about this new thing called “seeding” in my newsfeeds. Seeding is the act of placing gauze in a mother’s vagina several hours prior to a C-section, removing, sealing in a bag, then opening it after the baby is born and wiping the baby down in the gauze as to simulate vaginal birth. I personally did not find enough research done about seeding to call it a “new thing”, and found it appalling that even semi large media outlets would put this out there as the latest and greatest thing. It must have been a slow news day.  To eliminate any doubt I asked Dr. Burke-Galloway about seeding, and my suspicion was confirmed this is not evidence based medicine as of yet stating “…there are no studies involving at least 1,200 babies that could substantiate any significant benefit.”

Please understand the women who fall into this category are not out to be difficult divas. They have fallen prey to the natural childbirth zealots who tell expecting women, who are only looking for the best for their babies, to trust nothing their “med-wife” or doctor says and only they (the zealots) have the good glitter sprinkled outcomes. Some women do have glitter sprinkled birth experiences that result in healthy babies. While there have been many other women who have walked away from home birth or crunchy birth centers with unqualified midwives with empty arms because their baby died because of their negligence. Dr. Amy Tuteur of The Skeptical OB has come to be a watch dog of NCB zealots over the years. Every tragic preventable death she unearths on the internet is just a sad as the last one, and the one before that. It never gets easy to hear and read about.

One of the cases Dr. Tuteur came across in 2014 was that of a woman I will refer to as D, who hired and trusted a Las Vegas based midwife named Christy Collins. She looked legit from all outward appearances, but when D had zero amniotic fluid left at the end of her pregnancy, Ms. Collins had no idea what to do and her lack of knowledge and bad advice resulted in the death of D’s baby boy. Ms. Collins and the rest of the NCB community tried to sweep the death under the rug to avoid any responsibility, which is common in that community when a death happens. There is no accountability in that world. You can read detailed accounts from D herself on her Facebook page In Light ofGavin Michael. Also, you can read about other tragedies HERE and HERE.

I am going to conclude this blog entry by saying…begging..please do not accept medical advice from internet strangers over real life care providers and beware of homeopath hype. The pharmaceutical industry catches a lot of heat over the profits they bring in, but the entities and public figures who push herbs, oils and other magical supplements are not giving them away for free. Homeopath rakes in considerable amounts of profits as well, please for your sake don’t overlook that fact. Speaking of care providers, make sure they are a capable provider. Know what your state’s requirements for handing out licenses and verify your provider’s background and credentials. 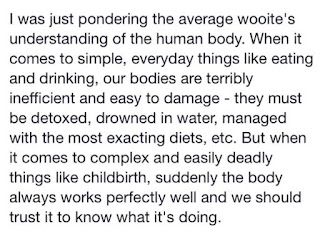 I don't know  the author to give credit, but who ever they are they are brilliant!