//The time had come, and soon my alarm would go off at 3:15am. The time I needed to get up and head to the hospital. The same hospital I was born at, and my mom had died at.
My ride arrived and off we went, even with Calvin in tow. The Couple were going to help me with him since the adoption choice had me pushed away from family, or in just plain hiding. Besides, our big boys were best buds, and they would have a blast.
They met me at the hospital, played with Calvin while I checked in. Soon enough we were in an L&D room, and I was being prepped for the OR and She was putting on sterile gear to meet me in there.

Soon enough I was on the table waiting for the spinal to take effect so the cutting could begin. She was brought into the OR to witness the birth, per my request months ago.  After months of extra fluid and pre-term labor, I was never so happy about being cut into! This time around was so much better than the emergency c-section with Calvin. Everyone was so relaxed, I knew what was about to happen, plus all my problems were about to be over and I could get on with life.

After about ten minutes, a loud pissed off cry filled the room. There were immediate comments about "what a big boy this is", after he was placed on the weigh machine there were comments "OMG 9 pounds 6 ounces"!!!! Despite the surgical wound, my body felt so much instant relief!

Tears filled my eyes.....something I was not expecting to happen. What was this emotion that suddenly hit me? My problems were over, why am I emotional?? Why were there tears?

Surgery was still in progress as I had chosen to have a tubal ligation, but laughter and ooo's and ah's suddenly feel silent as a crowd gathered around the newborn warmer. I couldn't see much through blurry eyes, anesthesia and pain medicine but the mood in the room had definitely suddenly changed. The next thing I heard was NICU and the next thing I saw was everyone running out of the OR. I had no clue what was going on, but certainly was not prepared for what was to come.

I slept hard in recovery for I don't know how long. I was barely coherent when moved to a room, but was comfortable as could be. I recall Him bringing Calvin in to see me for a few minutes, I recall Her popped in too and showing me photos of Jones.  I'm not sure how much time had passed but I'm guessing it was several hours at least before I could hold my eyes open. The NICU doctor and the Couple came in to discuss this issues for Jones being in NICU. Respiratory distress, not sure as to why though? There was more...Jones had obvious abnormalities. Large soft spot, webbed skin on his neck, the shape of his eyes, low set ears, un-descended testes, signs of a genetic abnormality the doctor said. He would be doing some research to come up with some ideas.

This just couldn't be. I had the tests done, ALL the tests plus weekly sonograms. The tests said "genetically normal", this was technology and science. How could this be wrong?? How could this be happening?? The couple though, they had said they already loved him so much. This surely didn't matter.

A few more hours later I decided I could move finally and I wanted to see the baby.  I was wheeled to the NICU by staff, I didn't even know which baby I had birthed. There was a few I thought was him, but we rolled right past, at last we stopped at a Giraffe Warmer that held a ginormous baby. They placed him in my arms, I couldn't believe this huge baby was inside my body less than twelve hours ago. I could see the abnormalities the doctor spoke of, but then I felt like I was looking at a face I had seen before. I wasn't sure who or where, but I knew this face from somewhere. After a few minutes pain was setting in and I requested to be taken back to bed. On the way back to my room I was just wrapping my head around the concept that I had just held my baby. My baby, but he had been promised to someone else.

It suddenly hit me who's face I was seeing. My grandpa, Grandpa Hite who had passed away a year before I was born and I never got to meet. I felt like it was him looking back at me. What was the message I was supposed to be getting?? 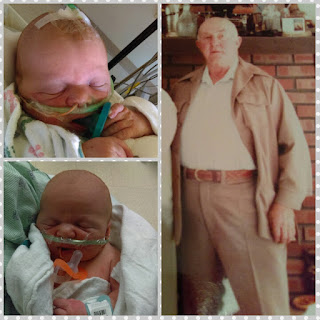 This is where I am pausing again....