In my prior posts I mentioned that NICU doctors suspected John had Noonan Syndrome (NS), and most of his characteristics fit the syndrome. He was tested at six weeks old while he was in the hospital being evaluated for his G-tube. It took about a month to get results back, but it confirmed suspicions of several doctors.

NS is named for Jacqueline Noonan, a pediatric cardiologist who connected the dots between several similar characteristics in 1962. Reports of several symptoms date back to the 1800's, but no one had tied all the information together until then.

NS patients can be effected by a wide variety of symptoms and characteristics. The more common ones tend to be craniofacial characteristics such as short neck, eyelids that appear to be "droopy", and an overall large head. Heart defects are common, blood disorders are common, short stature is common. I'm not trying to write a medical research paper here, so I won't bore you with lots of details. However, if you are curious there are links at the end of this post that includes in depth information.

Oh, but one last thing before I move on...NS is NOT the "boy version of Turner Syndrome". ARRGGG! Such outdated statement to make! There is also more on that in the links at the bottom.

John has the common craniofacial characteristics, he has the "droopy" eyelids and I am often asked by strangers if it is his nap time. He has a somewhat large head, the short neck and he had the webbed skin on his neck at birth. He grew into the extra skin in time and still is growing into it to some extent. Despite his appearance, he is still outrageously adorable! Perhaps I am biased though?

He also deals with Failure to Thrive, this resulted in his receiving a G-tube which was later turned into a GJ-tube and provides all his nutrition. Poor eating is ties into his poor muscle tone, sucking a bottle or breast takes a lot of effort and energy for someone with low or poor muscle tone. He just could not sustain himself to a healthy threshold. I can't even count how many questions the tube hanging out of his clothes has brought! What is THAT? What is wrong with him? Will that always be there? Why does he need it? My answers have become calloused over time. I used to try to explain it in the very beginning, but now my answers are more like "it's complicated", "it's a long story", and then promptly ignoring the person. 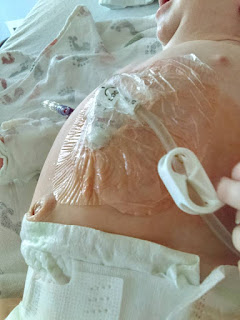 John had open heart surgery when he was five months old to correct his Pulmonary Valve Stenosis. That was a very scary experience but he came out like a warrior! 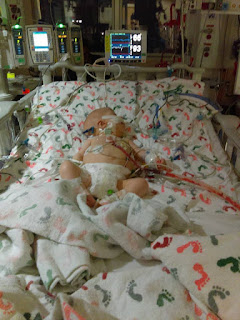 Today, John is well and medically stable. We are working on all his skills to close as much developmental delay gap as possible. I believe he will do great things in life and NS will not define him! 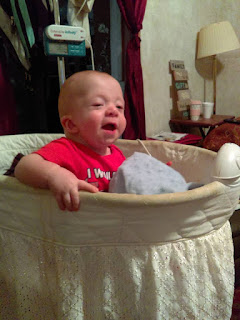