Yes, I am almost a week behind as I normally post on Wednesday's, but this past week has been treacherous to say the least. Anything that can go wrong has gong wrong. My internet connection has been spotty at best despited being repaired, my car had to go to the shop on a trailer, on and on and on.

So  yes, I am a little behind.

Not only are tube fed children and adults not living off of canned medical milkshakes anymore, but the reasons for having a tube are vast. There are those in society who picture only severly disabled individuals having a tube. Bed ridden and unaware of of their sourroundings, however this is just not true.

Feeding tubes can be used for those who have severe G.I. disorders where the stomach needs to be bypassed to avoid vomiting.

Feeding tubes can be used for infants and small children who have severe reflux and refuse to eat orally, or if they do eat orally, it just come right back up. A feeding tube will allow a pump to provide a very slow feed over several hours to avoid vomiting. Again, sometimes even bypassing the stomach.

Feeding tubes can also be used for infants born with cranofacial challenges that do not a allow them to suck from breast or bottle either at all or sufficently, even if they could swallow and tolerate milk just fine.

Nobody wants to see their child have to eat through a tube. Anyone in the feeding tube community would rather see their child not have to struggle and suffer with whatever disorder that created the need for the tube. There is nothing more annoying than to have people say nonsense like "don't feed him, he'll get hungry and start eating" or "I can get any kid to eat, you must be babying him too much". These are things that make the parent of a tube fed kid suddenly need bail money. Just be quiet if you do not understand the complexity behind the reasons for feeding tubes. 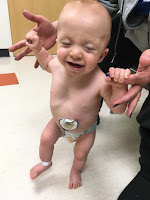 For John, it was a mix of hypotonia, poor coordination, reflux and lack of weight gain that caused his need for a tube. He recieves speech therepy now to work with his many aversions and sensory senstivites. We are working on it, but he still has a long way to go. He is behind in some ways, but so typical for his age in others. 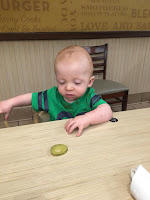 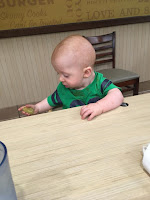 John looks for things to get into, adores his big brother, is on par for talking, and does NOT like the word "no". He can throw one heck of a tantrum!

I hope everyone had a wonderful #feedingtubeawareness week!

Posted by Unknown at 4:39 PM No comments: